On orders from the Count:
This Year, The Halloween Takes Place At Castle Dracula

THE CLASSIC DRACULA
&
HALLOWEEN IN TRANSYLVANIA

Through The Licensed tour-operator
“DIVERSIS BUSINESS TRAVEL Ltd.” Romania
and The Company of Mysterious Journeys

“Friends and Focs of the Count,

Think twice before you book this tour: by comparison, a journey to planet Mars, or Pluto, is a piece of cake: as if ‘Transylvania’ would not be enough, you will journey to the Realm of the Count, to his castle – and that will happen in the spookiest of nights, at Halloween time!

On another hand, the daring will share into outwordlish events And should they obey the rules of survival at the castle, they stand a fair chance to tell it all to their grandchildren. We advise you, therefore, to carefully examine the contents of this tour and see if you can face it. As Murphy said: ‘If anything can go wrong, it will’.

There is a cocktail and a briefing waiting for you at the hotel (for your metaphysical safety). And a “Transylvanian Diploma” which will be stamped along the route – or who is going to believe you, otherwise?

You are now in the province of Valahia, ruled – in the 15 century, by Prince Vlad Dracula – the Impaler, the man whose name was appropriated by Bram Stoker to baptize his vampire-count.
* arrival in Bucharest
* transfer to hotel (4-star)
* overnight in Bucharest
* welcome dinner 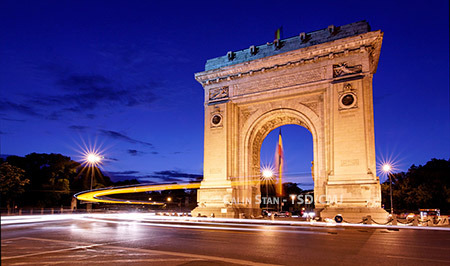 (“There is no way to enter Transylvania and leave unchanged” )

A TSD survey showed 8 out of 10 Americans disbelieving that Transylvania exists. And who could blame them, when fiction books and films in their hundreds chose Transylvania as a setting? Mankind needs magic-generators and this ancient Romanian province is one of them.
Morning:

Start a sightseeing tour of Bucharest touching the walls erected by Prince Vlad Dracula more than 555 years ago. The city has many stories to tell and treasures to show, but the October days are short and we need to reach the mountains, the Valahian side of the Carpathians.

Drive, therefore, to Transylvania, crossing briefly the second city of Romania – Brasov. The place is related to many of the legends with Vlad the Impaler Dracula. The guide will disclose you some secrets. Continue to Sighisoara in the centre of Transylvania – the best-preserved 15 century walled-town in Europe, birthplace of Vlad Dracula (1431). Witness a Witch-trial. Jules Michelet said that some 200,000 women and men perished as witches or wizard across Catholic Europe between the 15-th and the 18-th centuries. The last such trial in Transylvania occurred in 1753. This is a dramatic page in our history as humans, and yet another initiation step for you. Should the witch outlive the trial (it happened) we shall ask her for some herbs, potions or charms. After all, the witch and the vampire share a lot in common: supernatural powers, shape-shifting, flight… 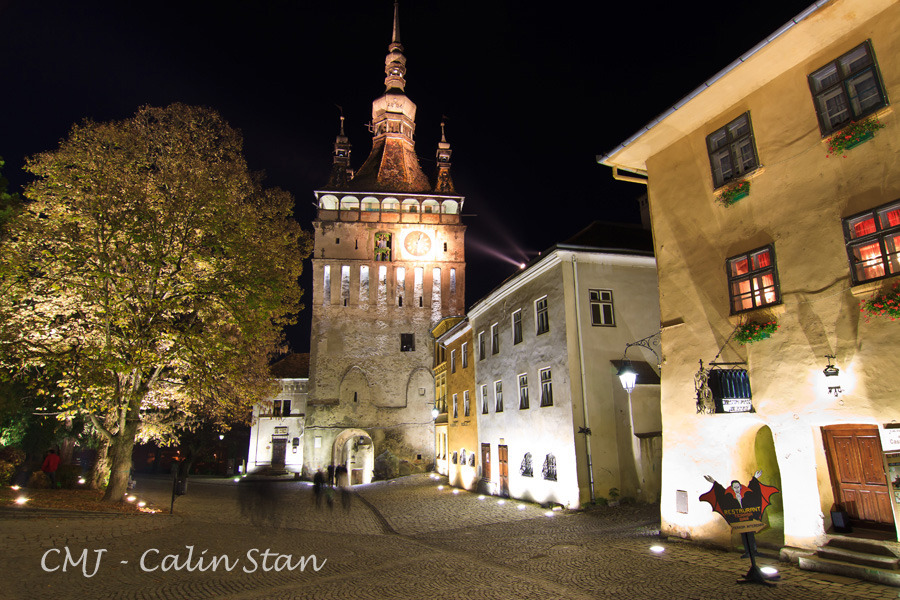 Oct. 31, DAY 3 / HALLOWEEN at the CASTLE of the VAMPIRE-COUNT

In the morning, continue to your Halloween place Borgo Pass, Castle of the fictional Dracula. On the way, try to test the plum brandy of the one of the Count’s ladies, Domnita, in Bistrita. Her drinks will open your appetite to everything.

Leave Bistrita after lunch for the final 45 km. to the heights of the Borgo Pass and the castle. You may turn the pages of the novel and see the very places mentioned within.

By sunset, we should be climbing into the majestic, wild, forested Pass. The farm-houses here are so rare that each has its own, private cemetery – living and dead within whispering distance.

As you enter the gate of the castle (“freely of your own will”) remember what the Count said to Jonathan Harker: “The old centuries had, and have, powers of their own, that mere ‘modernity’ cannot kill”

You will be told the rules of survival at Castle Dracula. Visit the public parts (you do not wish to see the others) and answer the invitations of the guide only (no-one’s else’s).

True, things at Castle Dracula get often out of hand (that’s why the castle has its own , private cemetery), but rarely on society tours. Will the Count be at the Halloween party? Yes, to meet his new Countess (Lady Transylvania to be his pair until the next Halloween Night) – under some disguise or another.

The contents of a TSD Halloween are generally reserved for the attendees, but we can tip you on a few things: the Little Shop from Hell (opened one night per year) will again offer the rare “After-Life Insurances” and especially the “Indulgences” – for 5 sins each; there is a prize for the “Halloweenest” costume and mask; sale and auction of exquisite Count Dracula Treasures; book a dance with Countess Dracula (if you dare); the purifying fire.
* look at mediaeval Bistrita through the eyes of Jonathan Harker
* optional lunch in Bistrita
* proceed to the Borgo Pass and Castle Dracula
* Halloween Party at Castle Dracula, dinner included
* overnight at the castle 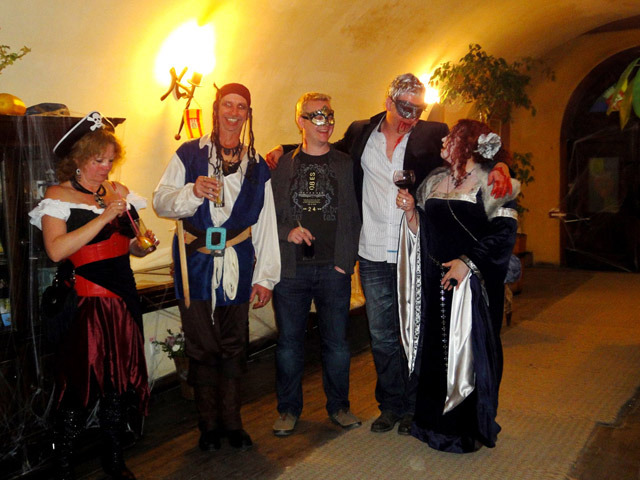 The survivors of the night should rush to stamp their “Transylvanian Diplomas” (and passports) with that unique castle-stamp.

Some of you may have lost your shadow, or reflection in the mirror – minor inconveniences of your new status. Others may loose them later.

Globe-trotters of fame said that the castle is emplaced in one of the most beautiful spots on earth. Take your last snapshots and leave the heights of the Borgo Pass for mediaeval Brasov, in another corner of Transylvania.

Your initiation continues – with more wondrous disclosures about the roots and meaning of the supernatural – of the kind treasured by the TSD. Questions and personal experiences will be invited – as we drive away from the Centre of the draculistic world.

It is a bit confusing to have two Draculas on hand, but this is a society tour which does not cheat – passing innocent castles as Dracula’s, or a historic character for a supernatural one (for lack of any knowledge about supernatural entities). These are the only tours providing access to the information gathered by the TSD at its yearly conferences, on both Draculas.

Take a short stroll in the morning in Brasov.

South of Brasov, across the hills, lies the entrance to the Gorge of the river Arges – guarded from above by fortress Poienari – the historical fortress Dracula. Few mortals have seen this eerie site. The legends match the landscape in dramatism.

In 1462, Prince Vlad, his wife and a few soldiers took refuge here, besieged by the Ottomans. Vlad sent for help across the hill, in the village of Aref. His wife did not believe escape was possible and threw herself into the river. Under cover of night, the Arefeans managed to take the Prince to safety, across the high Carpathians, into Transylvania. On the crest, Vlad made them owners of 16 mountains (a document issued 100 years later re-confirms the donation) 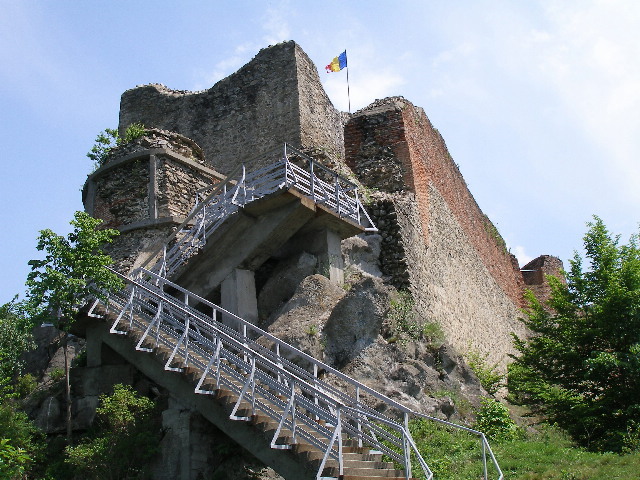 Today it’s a relaxed day. We all come back in Bucuresti, the Capital of Romania. Stroll, visits and shopping day.

*accommodation in a 4 star hotel
* faraway dinner in deluxe restaurant in Bucuresti.

You have been on a tour sharing the information gathered by the Society at its congresses and symposiums, from scholars and researchers, from thousands of Dracula romantics. Many returned for a Level 2, most are in touch – and we hope to change you even more.

The price for a group of 6 persons is:

And the price covers:

The payment should be done:

Excerpt:
The Company of Mysterious Journeys will penalize the tourists who renounce their bookings as follows (subtracting bank-transfer charges):
1) for cancellation of 30 and more days before the tour start: full refunding (minus banking charges)
2) for 29-21 days cancellation: 30% penalty
3) for 20-14 days cancellation: 50% penalty
4) for 13-7 days or less cancellation: 100% penalty in favour of the CMJ.

DIVERSIS BUSINESS TRAVEL – the tourist agency running the genuine tours of
THE TRANSYLVANIAN SOCIETY OF DRACULA and
Company of Mysterious Journeys.